Kia Kaha - say No to Bullying

During the last three days we were lucky enough to have Constable Louise talk to us about bullying. On the first day we learnt about all the different types of bullying that can happen to you and ways you can deal with it.
The main message here is if you’re getting bullied don’t keep it in, tell someone you trust.
On day two we learnt about cyber bullying. We think cyber bullying is the worst type of bullying because of what people do to themselves if they are in that situation. Constable Louise said that the most common age to get cyber bullied is when you are in your teen years and usually if you are a girl. She asked us who had a Facebook page why you may ask because to get a Facebook page is 13.quite a number of people in our class have Facebook pages but they are only 11  and 12 so this means they have lied about their age. The highest age faker in our class is 21 years old.
On day three we learnt about stereo typing. Stereo typing is when you judge someone on how they look and not there personality. You may not realise how often people do this and it can make people feel very uncomfortable.
We have learnt so much over the past few days so thank you very much Constable Louise.
Jordan and Kirsty
Posted by Room 10 Tokoroa Intermediate School No comments:

Hey my name is Jessica King and I am the room 10 class councillor. So Mrs Puke told us to make a presentation to convince people to vote for you.So my mum decided that I should make a video! I told her it was a spectacular idea, so that night Jack (my brother) got out the video camera and we got to work. It was all done so we went inside and put it on the hard drive I couldn’t wait to take it to school! On Thursday during assembly Mr Edwards called for the class councillors for our very first meeting. We learnt that we got to pull a name out of the hat for the tuck shop draw and if you name gets pulled out you get $2.00 off your next treat there! The day of Friday assembly I got my class councillor badge I felt proud because of my work on the video and scared about going up on stage but when you get up there it’s actually not that bad! I think I will be a good class councillor this year because I am beginning to get more confident and becoming more independent!
Posted by Room 10 Tokoroa Intermediate School No comments:

Today was a very successful day for Room 10's past and present!
The school House Captains were announced, this is the highest level of leadership at Tokoroa Intermediate and the positions are awarded to the top 16 students. Nominations are made by Year 7 teachers and all staff have input into the selection of these leaders.
This year 8 out of the 16 House Captains selected were from the class of 2012!

Even though he doesn't show it - I think Jevon is just a little proud ! Congratulations to you all, you so deserve the badges you received today!

The class of 2013, were announced winners of the Year 7 Softball competition. Following in the footsteps of all the other winning Room 10 classes ( 6 out of 9 times since the competition started in  2005!)Reina and Monica were the only girls in the team. Everyone displayed some great skills and we won't forget all Monica's home runs either. It's good to see some of the team join the after school softball competition where they can develop their knowledge of the game even further. 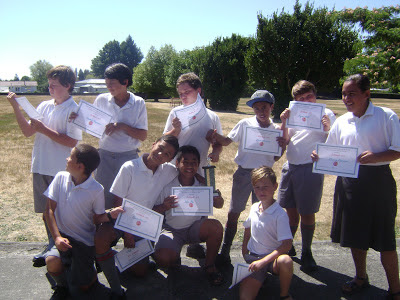 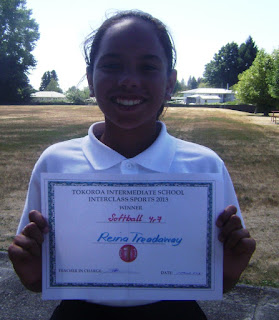 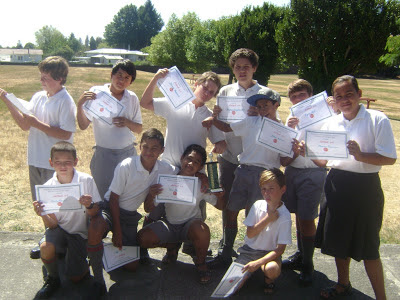 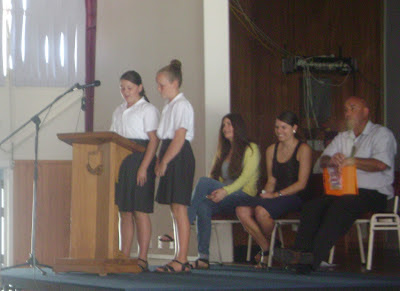 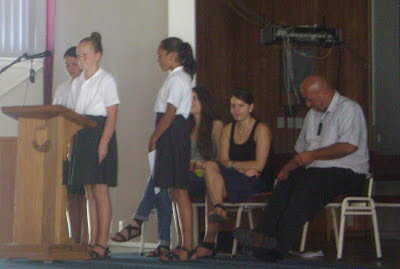