As part of our Social Studies and Writing everyone in Room 10 had to ' create a soldier or nurse' from Gallipoli. We looked at names from that era and ranks soldiers at Gallipoli may have had. We then wrote diary entries for these characters and researched aspects of life at Gallipoli to find out more about what life was like there for the Anzacs..


25th April 1915
Dear diary: Today we landed on the coast of Gallipoli in the wrong place. The Majors said it would be flat land but instead there were huge hills, with Turks sitting on top of them with guns. It was horrible men being killed everywhere what a day. At noon we started to dig a trench it is very shallow but it is finished. I have not had sleep since we saw land those were the days safe on the ship. There are lice all over us they seem to be taking over our trench. I have not had a wash yet but we do have our rations there is not much to eat and what we do get is poor. It is horrible (I hate bully beef). We have to savour all our food, everyone is always hungry. The Turks don’t stop fighting for breakfast lunch or dinner they seem to not sleep at night either. The soldiers’ on our side can’t sleep because of constant shelling. I thought going to war would be a great adventure, but it’s just poor lads being sent up hills to their death. I must get some shuteye we rise at dawn (although some of us can’t wont and never will).
25 April 1915 later: I can’t sleep the machine guns are crazy they’re firing like blazes. I would much rather be safe in my own bed than in a smelly trench with Turks trying to kill me. What were the generals thinking when they thought capturing the peninsula would be easy. If I was in charge we wouldn’t be in this hellhole. I hate this place I want to go home. I am also very disturbed at how loud George Tiro snores.
Chloe

27th April 1915 It’s been a week and the landing at Gallipoli still haunts me. I remember bringing the ship into the cove. I felt scared and worried about what would happen next, as soon as we stepped foot onto land the Turks fired. We could see the Turks waiting for us on top off the hills. I dragged wounded soldiers up the beach, while I was blinded by machine gun fire. I felt the taste of fear in my mouth. Edward Bennion my old school friend and I trudged up the muddy cliffs and slipped on the rocks. The smell of death was already here, because so many of my dear friends had already been killed by the Turks. I thought in my head what have I got myself into?

30th April 1915 My trench is dark there is only the light from the distant stars above me. I can hear the soldiers as they cry themselves to sleep, the Turks are still firing. It’s not been too long but still there’s the repulsive sight of dead bodies scattered everywhere. Numerous bullets fly above my trench and my heart starts pounding a mile a minute. It was very strange indeed seeing Ted Comer being taken away with a piece of shrapnel in his leg, poor lad. The blood from the Anzacs has stained the dirt and the sea, but we will still fight strong.

20th December Finally tonight the last group of men are leaving. A complete waste of time is what this has been, it never should have happened in the first place. Wounded men, dead men and others covered in disease. All though it’s been disastrous, we have been through a lot .The horrific landing and the capturing of Chunuk Bair was horrible. I can see the dead men and blood whenever I close my eyes. Some soldiers didn’t know why we were leaving, but I knew exactly why. We were sick, crawling with lice and have been shot straight to the bone, we can’t stay like this any longer. Since I’m with the last group of men it’s our job to set up the drip guns, so the Turks still thought we were there. It was a brilliant idea, this evacuation. We set up the guns and got ready to head to the ships. I never thought it would end like this, everyone just leaving it’s like we are giving up. We crept along in the dark to the ships; we were silent as we passed the graves of our Anzacs. It was hard but that is what we did as our last day on Gallipoli.
Georgia
Posted by Room 10 Tokoroa Intermediate School No comments:

The first Intermediate Social for Room 10 2013

In Room 10 this term our main topic has been studying about the ANZAC’s and Gallipoli. Our class have each made a diary from a soldier’s point-of-view. This was challenging for most of us. We also had an Anzac lunch, this included bully beef (corned beef) and rock hard biscuits. Most of us just hated it.
In language and reading we learnt to read nonfiction texts and wrote  soldier / nurse diaries for a Gallipoli character and newspaper reports. Our test results showed Room 10 has made tremendous progress! We have all been working extremely hard. Great work Room 10!
For P.E Mrs Long has been teaching us several different dance routines from different cultures, like the German clap dance and the Bunny Hop. The bird dance (The chicken dance) always gets us hyped up about P.E.
We have made more success in inter-class sport. Room 10’s Ki o Rahi team took out the Year 7 lunch time competition, not losing a single game. Our team were full of determined players and we all played hard and fair. We have also started inter-class touch rugby, unfortunately we have had 2 teams default to us so we haven’t had as many games as we would like.

We have had two mufti days at school this term. We all had to bring $2 in and give it to our class councillor, Jessica. We have raised $102 during these two mufti days. The money has been donated to the child cancer fund; Canteen and Fred Hollows. It’s great to see everyone out of their uniforms and having fun.
We also had our first Intermediate School Social on Tuesday night, everyone that attended had a good time . Luke and Qdezjah got Best Dressed Boy and Girl for Room 10.

Our class touch team, well organised by Renee ( with help from Reina and Qdezjah) won the Year 7 touch, sadly 2 of our wins were by default, but ... a win is a win ! 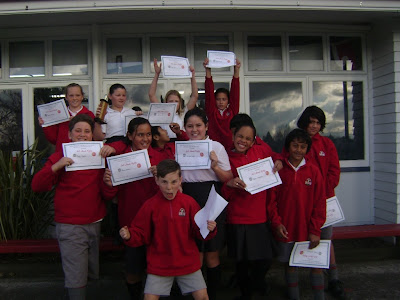 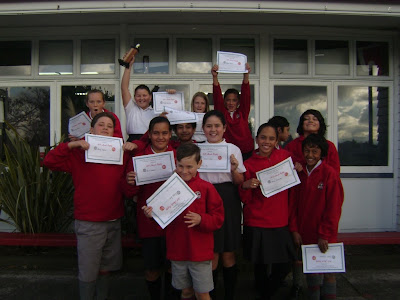 Self Freezing Coca-Cola -Jordan and Kirsty tried this and it works!

After watching this you tube video in class, Jordan and Kirsty both tried making a slushie:
I (Jordan) did the experiment using a bottle of coke ( the middle sized one) Kirsty used a can of coke.
What you will need is a bottle of coke, a freezer, and a glass.
Follow these steps
1. Place your bottle of coke in the freezer for 3 hours and 15 minutes. ( depending on how cold your freezer is)
2. Get your bottle out of the freezer and make sure it's not frozen.
3. Unscrew the lid and do it back up, then tip the bottle upside down- then it will freeze ( hopefully!)
4. Pour it into a glass and enjoy.
Recommended by Jordan and Kirsty