This term Tok intermediate was having softball games with Mr T after
school on Wednesday s and Mrs Moon was cooking us sausages and got
us drinks for after the games.We had to trial first to get in a team,the
teams were tahi, rua, toru and wha. We played some fun games for a while
but there were some interruptions because of the weather. When we
finished playing all the teams in the fun games we started a tournament,
3points for a win, 1 for a draw and 0 for a loss. At the end of the
competition team tahi won...I think, but i definitely know it wasnt my
team.When all the softball was over Mr T had to pick an allstars team to
face the staff this week . Mrs Puke better hit a home run.
By Jevon Waea-Allan


Year 7 Immunisations
Everyone in year 7 was given their immunisation. You were offered a free bootstrix vaccine.  Some people chose to get their immunisation with their family doctor. We were vaccinated against Tetanus, Diphtheria and Whooping cough. Tetanus is a disease that can get into the body through a cut or graze. It causes muscles to stiffen and go into spasm. It may affect the breathing muscles. Diphtheria affects the throat making it hard to breathe and swallow. It may also affect the nerves, muscles, heart and skin. Whooping cough (pertussis) damages the breathing tubes. Affected children may vomit and find it difficult to breathe during coughing spells.
The vaccine causes the body’s immune system to produce its own protection against the three diseases. Protection against Tetanus and Diphtheria is expected to last for at least twenty years. Protection against whooping cough is expected to last up to 10 years.
Tokoroa intermediate  students went to Matarawa Hall to be vaccinated that’s where the nurses were set up. Most of the nurses were kind. They had cardboard walls set up around them so kids weren’t embarrassed if they cried.
By Grace Roundhill and Laura Totton 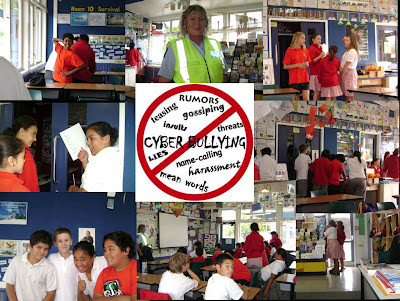 Over the last three days we have had Constable Louise coming and teaching us about bullying (kia kaha) and about cyber bullying. The last two days we have learnt how to deal with both types of bullying.
Cyber bullying is when you get a nasty text message or when someone posts something mean about somebody else on a social networking site.
Bullying is when somebody repeatedly annoys you.
The main thing I learnt was to
TELL SOMEBODY!!!!!
Thomas Bates
Posted by Room 10 Tokoroa Intermediate School No comments:

This week class photos were taken- this is us getting ready, shortest to tallest! Shirts tucked in and socks up!

Ultimate Frisbee began, TeReti got given the job of organising the team and made Captain, we won our first game against Room 9.
Photos of the game were taken by Thomas and Jevon. 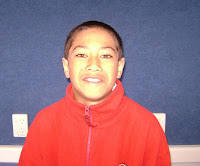 Jayden joined us from Room 9 this week.... welcome to Room 10 !
Not a good week for softball - we lost to both Room 17 and Room 18, maybe we'll do better at Ultimate Frisbee﻿
Posted by Room 10 Tokoroa Intermediate School No comments: 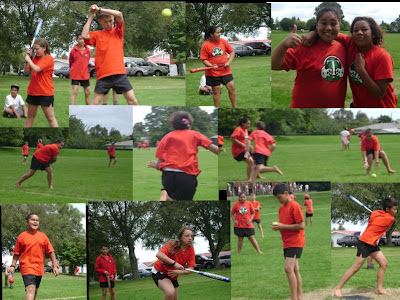 Today, Friday 2 March, it was Room 10 vs Room 16 in a hard head to head intensive game. We had our star Cameron in the outfield, he was also our captain. He caught and threw balls that prevented the opposition from winning the game. Some of our other star players were not able to play due to lack of homework done. We won 5-3.
Our next opponents are Room 17. We hope the boys do their homework because we surely need a strong team.
Kristyn and Angel 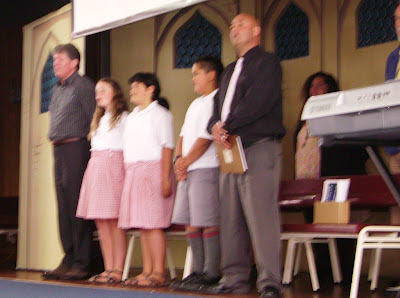 Today, Katie Mae, Kristyn and Jevon hosted Assembly. This was a first for Year 7's. It was nerve racking at first but we pulled through. We sat on stage with some of the staff and our other students were supportive of us. Mr Thompson announced the House Captains for 2012 and presented their badges.
Kristyn and Katie Mae
Posted by Room 10 Tokoroa Intermediate School No comments: