Tug of War and some of our Memoirs

Last week the Tug of War competition started - The Room 10 boys were eliminated but the girls team went on to win the final! 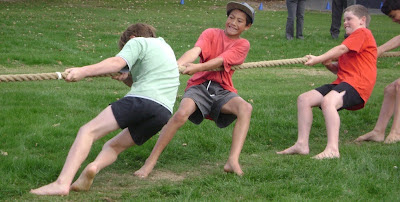 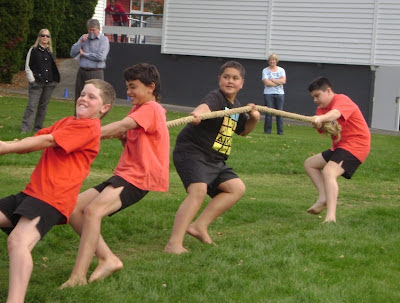 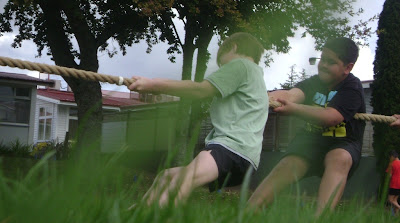 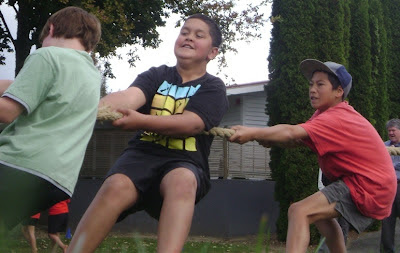 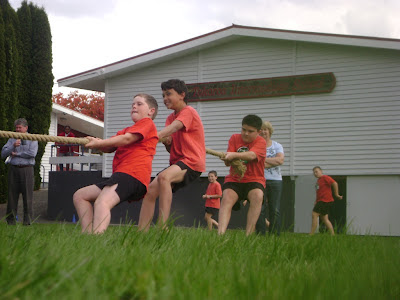 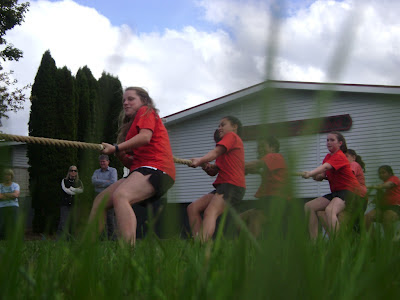 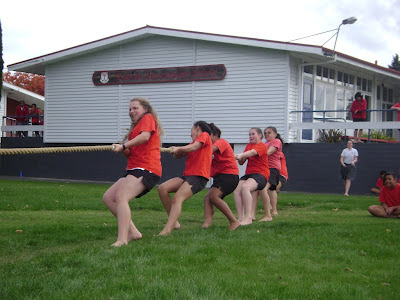 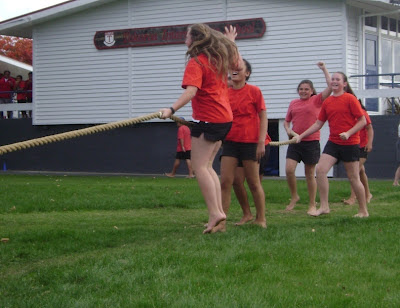 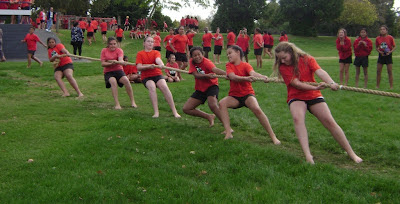 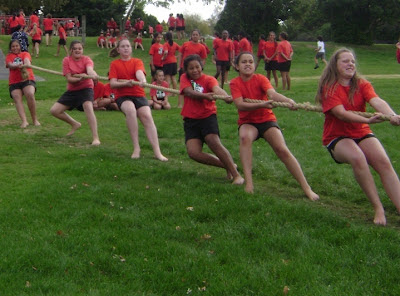 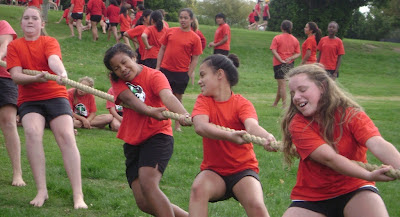 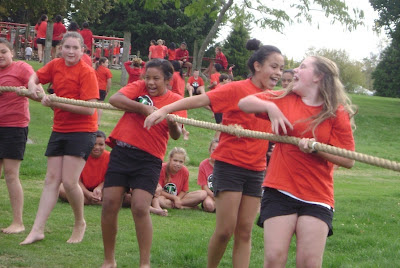 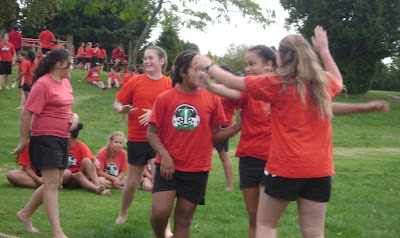 In Term 1 we wrote Memoirs:

The Lighthouse
TINK! Go the stones knocking under the car as we drive up the rocky road, just kilometres away from the lighthouse . I’ve been waiting one day, one night and a couple of hours.
Stuck in this shiny car listening to my cousin’s choice of  Kanye West songs that are hurting my head from listening to them over and over again. I start thinking about the lighthouse; It will be my first time seeing it. It’s going to be exciting. I’ve only seen it in books and pictures but I’m sure the real thing looks better than the pictures.
Eeeekkkk! Go the brakes as we pull up into the parking lot. I look around: there’s lots of Chinese tourist taking photos of the entrance to the path, we had to wait ten minutes to get in thanks to them. It felt so annoying. Well, as we walk down the wavy pathway. I stare at the sea , you can hear the waves crash against the shore and you can see the sea sparkle and shine.
Seagulls are squawking in my ear. “Annoying things” I say to myself. I look to see if I can see the Lighthouse, but no, I can’t see it because of the hills are too high. Then we’re there! The Lighthouse! It looks better than the pictures .I gaze yellow  sign that points to places in the world! Lastly the beautiful view of the sparkly gliding seagulls in the sky! We take a few quick photos and we’re off home.
Bye Lighthouse!
By Katie-Mae.

Fernai
She’s dead.My body quivered with shock. I couldn’t believe my ears.
As she tried not to cry, Mum sat me down to explain what had happened. In that instance all my other worries vanished.

She’d found Fernai lying in the gutter, dead after being hit by a car. Fernai was really special to me because Christopher rescued her from a farm. He couldn’t handle the thought of her being shot or hosed away. The farmer was going to do that to her. We’d had her since she was about 3 weeks old; she had lived with us for about a year and a half. I loved her.

I felt like a ton of bricks had been dropped on my heart, crushing it so that it would never work again. We buried Fernai wrapped in a towel in the garden. I suspect Patches (our dog) missed Fernai too because a few days later we found she had been dug up.

The Dance of my Life.
“Up onto the stage Sarah” Dianne my Instructor called, I felt like I was climbing a mountain when I stumbled up the stairs onto the stage.
I stood there feeling very nervous, but very excited. I was wearing my butterfly wings and a pink tutu. As the music for my routine began everyone looked at me up on the stage and they had their eyes on me. I had noticed someone out of the corner of my eye. I had to have a look, so I did. It was my instructor Dianne she was showing me what to do behind the curtain. I could see my Mum, Nana and Grandma in the crowd.
I was so frightened that it felt like my routine had shot right out of my head and then came right back in .I started to dance “heel, toe, heel, toe “my brain was telling my feet to do. I began to spin and spin until I nearly fell over. “Weeee” I was thinking in my head as I pranced around the room like a unicorn in a field of daises. 1, 2, 3, 4, 5 I am saying to myself as I do my dance. I could feel the sweat on my forehead as it stared to drip down my face.
The song starts to fade and I slowly started to in the spot I was in. When the music completely finished I bowed low to the crowd to let them know I had finished. As I walked off the stage as my butterfly wings were bouncing behind me.I felt really great that I had done it. I didn’t want to go home I wanted to stay and do it again and again.
Sarah


Spear Fishing.
Splash slash splash went the water as it rocked the boat side to side I was as nervous as shiver shot up my spine, I put my wet suit on and attempted to set up my spear gun and that did not go well… I gave up and just asked Craig for help.
I stood on the edge of the boat and did a flip in to the silvery blue water, When I surfaced I blew the water out of my snorkel like an elephant, spraying water every, then Craig who works at the dive shop asked me if I was all good. He was teaching me how to spearfish and the coolest thing about him is that he can dive down really deep and stay there for so long.
We started searching through glimmering water. I cannot stay down for very long so I stayed near the surface. I kept looking around for a scrumptious butterfish but all I could see was were blue mau mau and they were too damming small. Suddenly I felt like there was something following me as I turned me seen a slow black outline of a shark I imagined this like an episode of jaws…           I turned back around there it was…
A huge kawai staring at me, I slowly pulled up my gun but as soon as I did, it was gone in a flash just at that point Craig signalled to me if we should turn around so we did, and still we had that school of dam small blue mau mau following us. Finally we spotted a fat juicy looking butterfish so I dived down as far as I could I closed my eyes and pulled the trigger as hard as I could and… I missed!
Maybe I should not close my eyes this time as I reloaded my spear gun I aimed up the spear gun and took fire the spear sped through the water and hit the rock! Once again I reloaded my spear gun and lined it up so straight that I could not miss by an inch. I pulled the trigger and finally, oh finally I hit my first ever butterfish.
Thomas


The Stag Do
“Should I have done this?, well it’s too late now,” as I said to  myself  as I sat  in my van with seven adults and my brother Jemaine. We both looked at each over with curious faces I whispered, “is this gonna  hurt?,”
Jemanie replied “yes it’s painful” as he gave me a cheeky grin. I gulped. I glanced out the window all I could see is an ocean of trees. It took a long time to get to our destination but when we turned the corner I knew we were there.

We drove up the bumpy drive way, it felt like I was biskiting at the lake. I saw a big rusty shed to the side of the driveway suddenly I heard a bang it was the sound of a gun inside the forest. I heard a man yell “five minutes” at the top of his lungs.
We jumped out of the van, I could smell the nice fresh air, but I wondered where the others were they must have been at the liquor store too long. “oh no we might’ve  got the wrong place,” I said to everyone, suddenly we heard a Ute “who are these Maoris” I whispered to myself, but when I saw them jump out, it was my uncle and his friends, I immediately regretted what I said. ”so much for a van” I said to my uncle, he just went”uhh”.
The man in charge of the paintballing came over to us and said “get ready”, I put layers and layers of t-shirts on to keep me safe so if someone hit me it won’t hurt. (But it did, it was painful)Then we went in, we were all geared up but we were missing something? It was our helmets, we needed the helmets. Jemaine and I got to pick the teams, my team was black, Jemaine’s was green. The man in charge told us the rules: one of them was if you get hit, you yell !!!!! and run and touch your base, another rule was that you can’t take off your helmet because you could get hit  in the face and you could get blinded instantly (“it won’t matter,” I laughed to myself,”Jemaine is already blind,”  )  he also told us you could lose a few teeth. The man yelled, “you got that, are you ready to get there,” we shouted back “YEAH.’’
This was it, this was what I had been waiting for, it was time to paintball. We all went in the forest to hide, I saw a person run I aimed and fired, bang! It hit Jemaine in the leg, the game was on.
Jevon